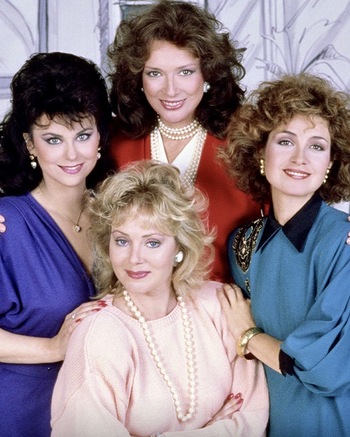 Southern-Fried Golden Girls.
"And I was left only to pick up an abandoned handkerchief and savor the perfumed shadows of these women... these southern women. This Suzanne. This Julia. This Mary Jo and Charlene."'
— "Dash Goff, the Writer" (Season 2, Episode 6)
Advertisement:

A 1986–93 Work Com created by Linda Bloodworth-Thomason, about four Southern women who operate an interior design company in Atlanta, Georgia. The cast included:

The cast was rounded out by ex-con Anthony Bouvier (Meshach Taylor), Bernice Clifton (Alice Ghostley), and a steady parade of children, boyfriends, ex-husbands and assorted oddballs. After half the cast left in 1991, some new characters appeared to replace them, but they were not as well-received. The series aired on CBS from September 29, 1986 until May 24, 1993 and spawned an unsuccessful spin-off (Women of the House

And THAT was the night the tropes got listed in Georgia!