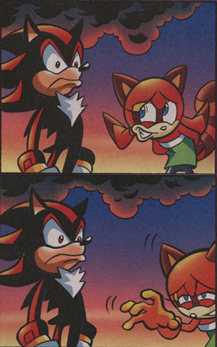 It's a situation anyone who spends much time with other people has experienced: another person does something so strange or off-putting that you can't help but feel intensely uncomfortable. Perhaps a Cloudcuckoolander is on top of their weirdness game, or maybe the Nervous Wreck is nattering on and on about nothing significant, or perhaps you're stuck with someone who, while harmless, doesn't have a much of a concept of interpersonal boundaries.

So you're uncomfortable and want to get away, but you don't want to cause a scene, call the offender's attention to yourself, or make your situation worse. Sometimes, all you can do is Back Away Slowly until you're a more comfortable distance away.

The Backing Away Slowly trope occurs when a character slowly moves away from another character whose words or actions are making them feel awkward, embarrassed, or weirded out. They're not necessarily acting out of fear so much as trying to discreetly remove or distance themselves from an uncomfortable situation before it gets even more uncomfortable.

This trope sees the most use as a gag in comedies and cartoons, but it can also be used in serious moments as as well.

For instances where a person slowly backs away from a wild or aggressive animal, see Nice Kitty.... When a person enters a room, sees another person in a compromising position, and immediately closes the door again, that's Sorry to Interrupt. Contrast Backing into Danger, which is where a person backs right into a monster or trap.

May be accompanied by Screw This, I'm Outta Here!, I'll Pretend I Didn't Hear That, or I Have Nothing to Say to That.

Owen tries to comfort Molly after her disastrous first kiss with Brendan, but Molly is too frustrated with what happened. Owen backs away from Molly, but he assures it's not her it's him.

Owen tries to comfort Molly after her disastrous first kiss with Brendan, but Molly is too frustrated with what happened. Owen backs away from Molly, but he assures it's not her it's him.