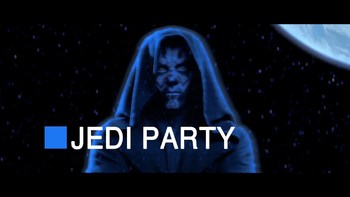 "What's up everyone? It's your boy, Kylo. I'm back."
We cause the sun to rise,
We dance so no one dies,
We dance like Jedi,
Because we're Jedi.
— Dance of the Fates
Advertisement:

Gag Dubs and musical parodies of the Star Wars franchise by a team of musicians and fans called Auralnauts.

First and foremost, there is their Star Wars Saga.

In an Alternate Universe, the events of the Star Wars films play out not as a classic struggle between good and evil, but as a series of disputes between galactic entertainment venues and unruly patrons. In this universe, the Jedi are drug-addled party animals, constantly high on a form of heroin called "midichlorians", infamous for trashing honest establishments run by the savvy Sith businessmen.

Setting the series further apart from other Gag Dubs is its original music - the Auralnauts are electronic musicians and each episode shows off Star Wars-themed tracks created by them. Add a bizarre subplot about one droid's descent into sociopathic madness, and you have a series as far from George Lucas' original vision as possible.

They also have a series called Kylo Ren Official.

Now also has an under construction character page.

Compare The Star War Gatherings, another Gag Dub that takes the Star Wars films in a hilarious direction.

Spoilers for the Star Wars Sequel Trilogy are unmarked

A Gag Dub series which edits the Original Trilogy movies to make them "more consistent" with the Prequel Trilogy, Sequel Trilogy, and the various TV series. Consists of three episodes, one each for A New Hope, The Empire Strikes Back, and Return of the Jedi. "Inspired" by Star Wars SC 38 Reimagined.

A Gag Dub video made over The Mandalorian.

A Gag Dub also made over The Mandalorian, specifically over a scene with the two Scout Troopers in Season 1, and the two X-Wing pilots in Season 2.

A Gag Dub made over The Book of Boba Fett, where Boba Fett tells the story about the second best day of his life.