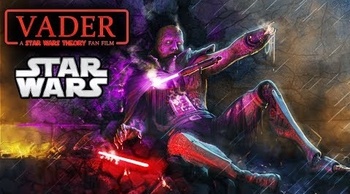 For eight months, the mysterious DARTH VADER
has enforced the Emperor's commands.

For some, the EMPIRE brings fear.
For others, it brings hope.

But for Vader, it brings nothing but SUFFERING...

Vader is an American Star Wars Fan Film series directed by Danny Ramirez, written by the people behind the YouTube channel Star Wars Theory and uploaded on the latter.
Advertisement:

As the title implies, it focuses on Darth Vader. The story takes place in the aftermath of the events that concluded Revenge of the Sith, as Vader has an internal conflict between his former self, Anakin Skywalker, mourning the loss of the love of his life, Amidala, and the new cursed life he now leads as Emperor Palpatine's pawn.

Episode 1: Shards of the Past