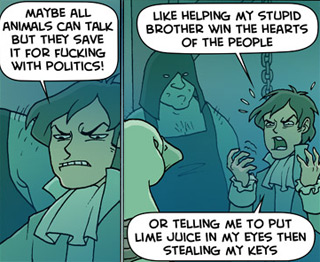 Dave: You put a dime in him, you gotta let the whole song play out.
Kurt: He like human jukebox.
Luis: Oh, my abuelita had a jukebox in the restaurant! Yeah, only played Morrissey, and if anybody ever complained, she'd be like "Oh, ¿no te gusta Moz?" — you know, chicanos, we call him Moz....
— Ant-Man and the Wasp
Advertisement:

When one character becomes so sidetracked by one train of thought that he completely forgets about the original topic.

Characters prone to this include the Cloud Cuckoo Lander and The Ditz. The Only Sane Man (who is often subject to this) can respond with a facepalm, some form of internal monologue expressing his disbelief, or an attempt to remind the invoker of this trope what they were talking about in the first place. Occasionally, the subject material brought up in the Derailed Train of Thought can result in the recipient receiving Too Much Information. Responses may include the Spit Take, and for added humor, the invoker of the Derailed Train of Thought may remain unaware of the reaction he/she has caused.

Compare also with Non Sequitur, in which it is heavily implied that the character should be discussing one thing, but one of them goes completely against those expectations. In this trope, it is made clear by an initial statement what the conversation is about, and then one character turns the topic to something completely different. Observe:

In Non Sequitur (taken from their page):

What we need is some way to stay in contact over long distances. Some sort of communication or "telephonic" device which is "mobile"... Of course! That's it! We'll train messenger pigeons!

In Derailed Train of Thought:

Alice: We'll need something to stay in contact over long distances. I think a cell phone should work, how about you?
Bob: That would work. Say, have you ever thought about how a cell phone and a cell could be related? Maybe the cells in our body have little cell phones implanted in their DNA. Speaking about DNA, have you...
Advertisement:

Notice that in the second example, Alice specifically stated that they were going to talk about cell phones, whereas in the first, it was merely implied.

Related to Wiki Walk, Metaphorgotten and Sidetracked by the Analogy. Compare Seinfeldian Conversation in which the conversation is pointless but not necessarily unrelated.