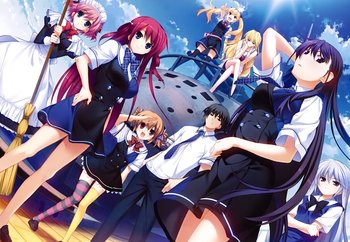 The Grisaia series are a series of visual novels created and published in Japan by Front Wing, with story by Fujisaki Ryuta and artwork by Fumio and Watanabe Akio, and later localized worldwide by Sekai Project. Starting back in Febuary 2011, the series now spans over three main visual novels and numerous side stories, spin-offs, and anime and manga adaptations. It's been considered as Front Wing's most successful visual novel series to date.

The story of the series centers around Yuuji Kazami, who enrolls into Mihama Academy in an attempt to live a normal life from his "job". While taking residence, he meets five girls, each with a reason for enrolling into the school, and later learns from their circumstances that his so-called "normal life" is anything but. Most of the series has Yuuji interact with the girls and developing a relationship with them, and all the while, also delving into a bit of his own shady past.

The series is composed of several installments: