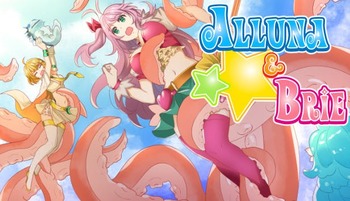 Alluna the blonde, and Brie the redhead
Alluna and Brie is an RPG spinoff of Max's Big Bust: A Captain Nekorai Tale by Lached Up Games, released in April 2019. You play as Brie, a magical girl with the power to summon magical grilled cheese sandwiches, as she and her companions, most of whom appeared in Max's Big Bust, fight their way through the armies of Queen PryScilla, who is attempting to take over the world. Much hilarity and hijinks ensue.