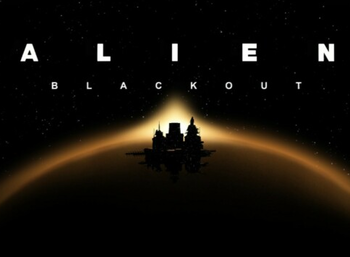 Alien: Blackout is a Survival Horror game in the Alien universe, developed by D3PA and released on January 24th, 2019 for mobile devices. It is a sequel to Alien: Isolation, as the player once again takes on the role of Amanda Ripley, the daughter of Ellen Ripley from the films. However, the gameplay is different, partly due to the mobile system demands, and being much more inspired by the Five Nights at Freddy's series.
Advertisement:

This time, the Xenomorph has infiltrated a smaller space station known as USCSS Mendel, and by the time the game starts, things have gone south to the point everyone besides Amanda is dead, and she is left hiding in a vent. While she managed to jury-rig enough power from the station to control the doors and the cameras for eight minutes, there still seems little hope of doing anything but delaying the inevitable...until the Haldin, a Weyland-Yutani ship with four employees on board, docks in for its scheduled resupply.

While they would definitely rather be anywhere else once they learn of the Xenomorph, their presence gives Amanda her chance of escape, as she can direct these people around the station to both scavenge the supplies needed for the ship to take off again, and hopefully figure out how to get rid of the Xenomorph.