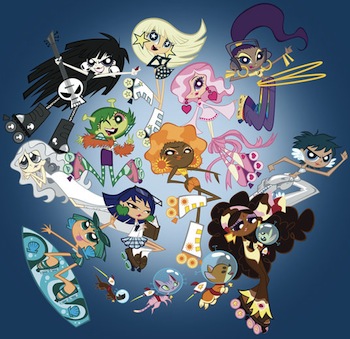 Meet the Girlaxy!
What planet are you from?
Advertisement:

Milky Way and the Galaxy Girls is an original toyline mainly aimed at girls and developed by Lauren Faust of My Little Pony: Friendship Is Magic fame. It's about girls with a planetary theme (known as the Girlaxy) similar to Sailor Moon and their various adventures.

The idea of the franchise came from some homemade dolls Lauren Faust made in her spare time. It's important to note that these dolls are something that Lauren is very passionate about, to the point that she is almost always trying to promote them on her official DeviantArt page

or on their official site. She's been trying to get an animated series based on them off the ground for years, in fact Friendship is Magic may have never happened if she wasn't pitching Galaxy Girls to Hasbro in the first place.

The main theme of the dolls is that there are many ways to be a girl, and it encourages girls to be their own unique selves while proving that being girly isn't a synonym for being lame.

The official website domains have lapsed in 2016 and been scooped up by domain squatters, but its latest archive can be visited here

, and the Solar Sisterhood Blog (which includes some in-character entries for the Girlaxy) can be found here

.note This is an older section of the site, but it's up-to-date. The main site currently lacks a way to view older entries, which is why we're providing a separate link to the blog. Sadly, with the loss of the domains, merchandise is only available second-hand. In 2021-2022, there have been hints that the franchise is returning, with Lauren Faust redesigning the girls, and then discovering a viral video by YouTuber Izzyzzz

, and exclaims about making new dolls

We have a forum discussion about it here