Characters who appear in the works of Milky Way and the Galaxy Girls, created by Lauren Faust. The whole lot of 'em are sometimes referred to collectively as The Girlaxy or The Solar Sisterhood.

The Girlaxy as a Whole
Milky Way 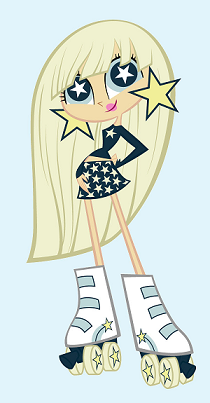 The heroine, role model, and star of the Galaxy Girls.
The starry-eyed front-woman of the Galaxy Girls, Milky Way is "what every girl wishes she was but doesn't know she is already: smart, confident, adventurous, and fun". She lives to explore the cosmos and make new experiences and friends, although her craving for adventure has a tendency to get in the way of common sense. Still, she's more than capable of getting out of any jam she gets in. Recently received a redesign

making her less of a Noodle Person.
The Sun 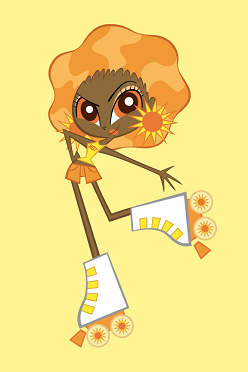 She's hot, she's bright, she is the light.
Like The Sun itself, Sun is the center of attention. The world revolves around her, and she'll make sure you know it! Energetic, confident, passionate, and HOT, Sun keeps the Solar Sisterhood warm with her heavenly voice.
Mercury 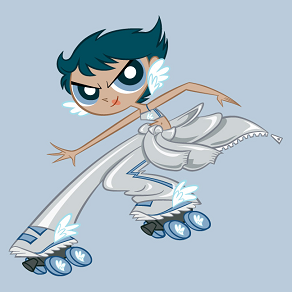 Ten seconds flat? She can cross the stars in nine.
As befitting of the name, Mercury prides herself on being the fastest in the galaxy, and is said to be able to reach the speed of light with her winged sneaker-skates. She's always working out to maintain her athletic ability, but as a result doesn't spend as much time with her friends as they'd like.
Venus 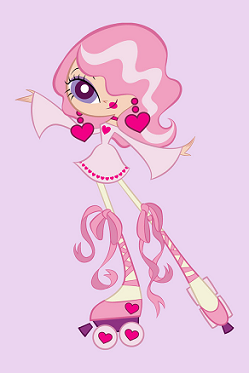 What Mercury is to speed, Venus is to beauty, wowing the Solar Sisterhood with her graceful appearance and dance moves. She's not to be taken lightly, though, as those moves demand a great deal of mental and physical discipline. 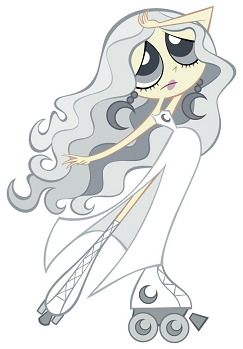 You think she'd make a good Sailor?
If there's a beauty in sadness, Moon personifies it. Her emotions ebb, flow, wax, and wane as much as her namesake, but her emotional nature inspire some of the most incredible poetry you can imagine.
Mars 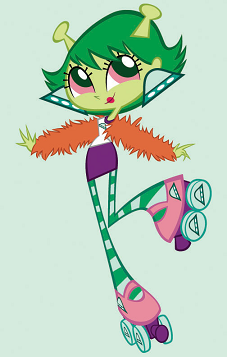 Greenie Pie?
Mars takes "out of this world" to a whole new level, in both appearance and demeanor. Her happy-go-lucky mind and perception of the universe are absolutely nothing like yours and mine. She's also an accomplished artist, her works looking like nothing you've ever seen.
Jupiter 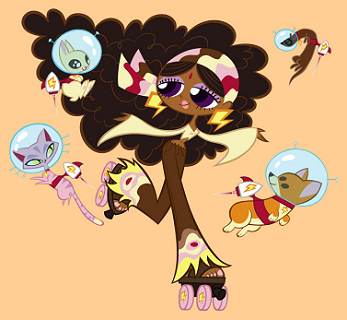 In case you're wondering, yes, she has 60 more pets.
...Wait, does that mean Saturn and Uranus have dozens of pets as well? and what does that say about Moon?
The spiritual hippie chick of the Girlaxy, Jupiter strives to become "one with the universe". As such, she's always organizing cosmic cleanup efforts and rescuing animals. Her favorites, and first ones rescued, are Io the Pup, Callisto the Cat, Europa the Bunny and Ganymede the Ferret.

Jupiter's Pets, Io the Pup, Callisto the Cat, Europa the Bunny and Ganymede the Ferret 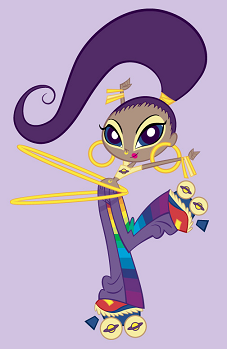 Is she a bit too young for all those piercings?
In addition to her many rings, Saturn is the chief music mixer in the Solar Sisterhood, busting phat beats on the turntables at her dance club.
Uranus 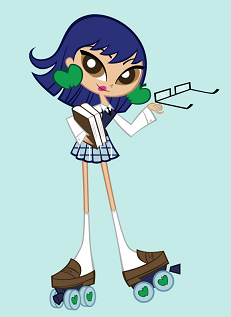 The problem with her preferred pronunciation is that rather than sounding like "your anus", it now sounds like "urine us". Poor girl can't win either way.
Uranus (pronounced YOOR-en-us, not yoor-A-nus, at her insistence) is a total perfectionist. She's a firm believer in the old adage that the most important learning happens when you're young, and as such is always studying all sorts of academic subjects and riding her twin sister, Neptune, to take her own studies more seriously. 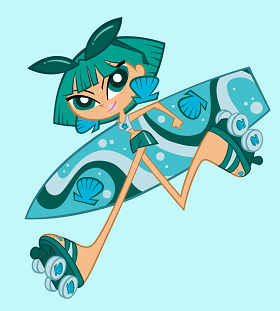 Dear Neptune, How do you surf with roller-skates on? Love, TV Tropes.
Neptune, naturally, lives for the seas of the universe. Whether hanging ten or just hanging out, she's a laid-back, "go with the flow" kind of person, which puts her at odds with her diligent sister, Uranus.
Pluto and the Dwarf Planets 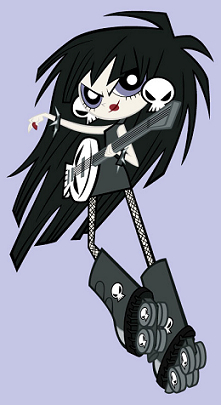 Could there be a warm core underneath that icy surface?
A rule-breaking rebel, Pluto is as cold and hard as the death metal music she plays, and she loves it, even if it might be what got her demoted to Dwarf Planet. Despite her stone cold attitude, Pluto's still a very passionate person, and she'll always stick up for her friends... possibly violently. 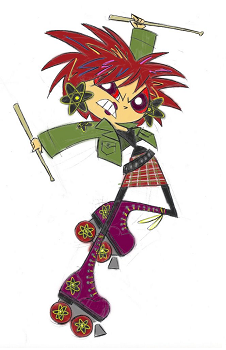 She's as explosive as she looks, so let's hope her drums are blast-proof.
The drummer for Pluto and the Dwarf Planets, Eris is a take-charge hothead who is best not crossed. 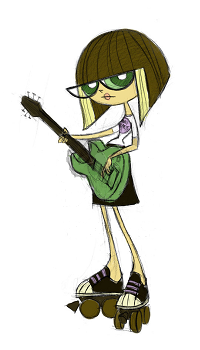 Trying not to come off as too similar to Daria.
The bassist of Pluto and the Dwarf Planets, Ceres is a non-conformist who eschewed having a personal symbol, but has since decided that blindly rejecting trends can be just as bad as blindly following them. The problem is that she still doesn't know what her symbol should be. 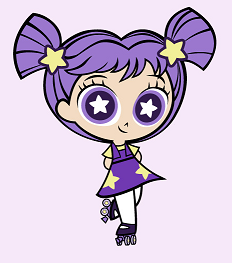 "Someday I wanna be a big star, just like my sis!"
Andromeda is Milky's adorable 5-year-old sister, always eager to hear about her latest adventures.
Black Hole
The Big Bad of the series and primary antagonist of the Galaxy Girls. He/She/It was freed from its planetoid prison after Milky Way touched it while wandering outer space, shattering it into 11 pieces and scattering them to different places in the Solar System. Unless he's/she's/it's contained again, Black Hole will generate a vortex capable of sucking up everything in the Universe! Even without his/her/its ability to erase everything from existence, Black Hole is still said to be one nasty customer.
Aliens 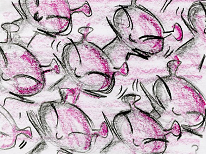 There's no time to invade Earth! There is only time for dancing!
Super-cute extraterrestrials that love to party at Saturn's place. Appear to be somewhat similar to but distinct from Mars.