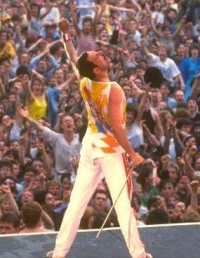 When they were young, everyone dreamed of being a Rock Star. They're living idols that people look up to. They follow every Rule of Cool and wear lots of tight leather and make up. They're loud. They're fun. They're rolling in girls and money. They're larger than life.

The Rock Star is often found around Sex, Drugs and Rock & Roll, but on occasion this is subverted and they are found to actually be the character with their heads screwed on the best. If this character is an adventurer they tend to use The Power of Rock as their weapon; or, failing that, they will be a Musical Assassin.

Not to Be Confused with Rock Star Song, which is a song about being one of these. British Rockstar is a specific subtrope that tends to focus on the less likable and/or glamorous tendencies of rockers.

Real Life examples of this trope would fall under Music.