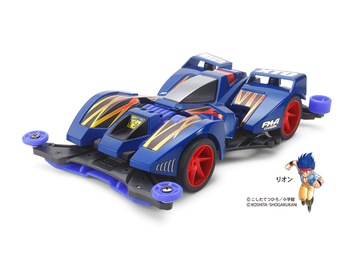 A "Gun Bluster XTO", as used by Rion Cusco in the anime.
Mini 4WD cars refer to a battery-powered scale model car made in a scale of between 1:20 to 1:48, though the term is mostly associated with 1:32 plastic AA battery powered plastic model race cars without remote control, which are commonly run on circuit tracks similar to slot cars but with separate lanes for each car instead of electrified rails. All four wheels are driven by a small brushed DC motor, one axle being driven through a small gear set and the other through a propeller shaft; the MS and MA chassis utilise a longitudinally-mounted motor with two driveshafts, making a propeller shaft unnecessary and allowing for more even power distribution as both axles are directly driven by the motor.

While Adolph Eddy Goldfarb is credited by some sources to have invented the Mini 4WD line through the Stompers line of miniature 4x4 trucks based on real-world trucks and pickups in 1980, a precursor line called the Quick Racer was released by Tamiya in 1968. The Quick Racer was rear-wheel drive only and used a different motor form factor, but it had a similar mechanical layout to modern Mini 4WD cars, thus setting the template for future models. Then-Tamiya president Shunsaku Tamiya made it a point "to make a model product that can be assembled easily," simplifying the internals by reducing the number of parts—eliminating wiring through the use of stamped-metal terminals connected directly to the motor and using as few moving parts as possible—and utilising a snap-together construction, as the company feared that the use of adhesives in a scale model line marketed towards children wasn't worth the bad press owing to inhalant abuse.note Since Japanese society has a much more negative perception towards narcotics and substance abuse, to the point that a number of notable individuals' works have been purged due to their drug-related indiscretions, this doesn't come as a surprise. In 1982, Tamiya produced Mini 4WD variants of their remote-control and static model kits, spawning a new hobby and various imitators from the likes of Hasbro's Record Breakers endorsed by Jesse Ventura (yes, that Jesse Ventura), Auldey and countless bootleg factories in China and elsewhere.

Tamiya's Mini 4WD line later spawned numerous manga serials in various Japanese manga magazines, all of which served as Merchandise-Driven tie-ins to the toys. Only two series that were serialized in Shogakukan's CoroCoro Comic (and later, CoroCoro Aniki) stands out — Dash! Yonkuro and Bakusou Kyoudai! Let's & Go!!, both of which were adapted into their respective anime series. While both Dash! Yonkuro and Let's & Go did not see a Western release, they were credited for spawning a cult following from children and hobbyists alike especially in Malaysia, Indonesia, Italy and the Philippines, where the toy line experienced an immense surge of popularity in the early 2000s note Malaysia was a special case however, since the toy surged in popularity in the mid-90s when Dash! Yonkuro first premiered on local terrestrial TV, sponsored by Tamiya's local distributor, who also aggressively marketed the models, and the toys were already popular in the country when the other markets finally caught up in the early 2000s. Tamiya commemorated this by producing special editions of the Shadow Shark, Gun Bluster XTO and Cyclone Magnum along with the Trairong, a car based on a winning design in a contest held by Tamiya in Thailand, and the Dyipne, which as the name implies, is based on the iconic Jeepney — a minibus commonly used as a form of public transport in the Philippines, which in turn was originally based on the Willys jeeps left by American forces right after World War II.

As of 2020, Tamiya has produced 28 different chassis platforms for their Mini 4WD line, a few of which are still being produced with the more recent ones sporting carbon reinforced composites and mid-mounted motors in stark contrast to the simpler and less mechanically complex ones from the 80s and 90s.