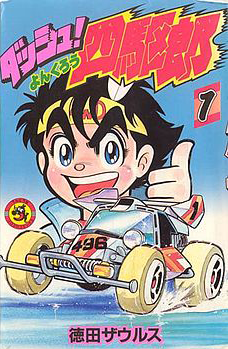 Dash! Yonkuro (ダッシュ!四駆郎) is a shonen manga series created by Zaurus Tokuda started in 1987 as a series of comic strips in Coro Coro Comic magazine. The series was made to promote Tamiya's Mini 4WD toyline and is responsible for starting the first Mini 4WD phenomenon in Japan. It got a 25-episode TV adaptation by Shogakukan Productions. Both the manga and anime did not see any widespread international release, but the anime adaptation of Dash! Yonkuro, along with its Spiritual Successor Bakusou Kyoudai! Let's & Go!! spawned a significant following in Italy, Philippines and Indonesia, among others. The story adds knowledge about tips and tricks in modifying and racing with mini 4WD, including track racing and street racing. The mini 4WD trend began and have stayed strong in these few countries after the anime was aired.

A young boy named Yonkuro Hinomaru, the owner of a minicar "the Emperor", which is left to him by his deceased father, leads a mini 4wd racing team called "Dash Warriors", consisting of a team of five. They enter a series of a mini 4WD racing competition. The story follows the Dash Warriors races through the tournament while facing racers from the Death Corp, which has both moral and immoral characters.

There's the time where Tokuda serializes Shin Dash! Yonkuro (真 ダッシュ! 四駆郎), a toy tie-in poster manga that were later included in some Mini 4WD car kits. Unfortunately it was cancelled due to the huge popularity of its Spiritual Successor at that time. It was the last Mini 4WD racing manga by Tokuda before he passed away in 2006 due to heart failure.

The new manga, titled Hyper Dash! Yonkuro (ハイパーダッシュ!四駆郎), is a sequel and a reboot to the original manga that was currently written by Hiroyuki Takei (Manga author of Butsu Zone, Shaman King, Jumbor Barutronica and Karakuridouji Ultimo) and started serializing on the Coro Coro Aniki magazine in 2015. The new manga tells the story of the reunited Dash Warriors, now renamed as Hyper Dash Warriors, races against Dark Dominion, a terrorist organization specialized in using Mini 4WD cars as weapons.

The original Dash! Yonkuro manga and anime provide example of the following tropes: