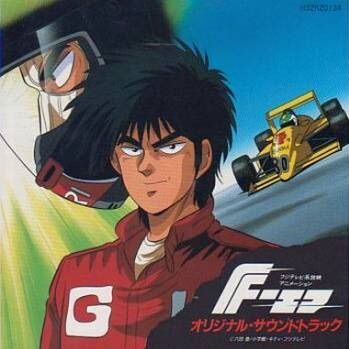 I won't let anyone overtake me!
"With your mind power, your determination, your instinct, and the experience as well, you can fly very high."
— Ayrton Senna
Advertisement:

F is a Seinen manga and anime created by Noboru Rokuda (of Dash Kappei fame) and is one of the first motorsport series focused on Formula One along with Arrow Emblem Grand Prix no taka (worldwide known as Super Grand Prix and Grand Prix). The manga was serialized between 1985 and 1992 in the magazine Big Comic Spirits, gaining the Shogakukan Manga Awards in 1991, and received an anime series in 1988 by Studio DEEN and animated by Atsuko Nakajima (being Ranma ½ her most famous work.) The series received two sequels: F Regeneration Ruri (2002-2006) and F Final (2009-2011), none of them have an Animated Adaptation yet. The first manga received a digital release in English by Creek & River Co. from July 3 to November 18, 2015.

The story is about Gunma Akagi, a Hot-Blooded teenager country boy who fullfills his dream to race in Formula 1 and his way to become the greatest F1 racer of all and all the problems he has to struggle, as an Archnemesis Dad, treasons and even some significant deaths of his close people. F is both a manga about racing, and also the story of a conflict between father and son, as Gunma seeks to achieve his dream of excelling over his father with success on the F1 stage.

You can find more info in the article

on The Other Wiki, the pages for manga

in Anime News Network and in this site

Not to be confused with Macross F, F-Zero, Zero no Tsukaima: F, Resurrection 'F', or FF. And much less the Memetic Mutation of "Press F to Pay Respects" nor the Triumphant Example: F here on TV Tropes.