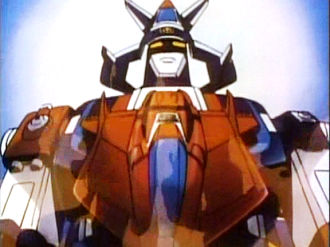 "Dairugger fighting formation on!" — Aki, Once an Episode
Advertisement:

Combining Mecha from Toei that aired on TV Tokyo in 1982. Since shows like this were a dime a dozen in Japan, it unfortunately got overlooked. But elsewhere, including the US, where Humongous Mecha shows were still practically unheard of, it got recognition as the vehicle robot of Voltron.

Dairugger is a peacekeeping and exploration robot during the days of space exploration. The Terran League (consisting of planets Earth, Sala, and Mira — but mostly Earth) decides to survey the galaxy, so that they can make a galactic star map. But the first mission runs into the Galbeston Empire, who decide to attack Earth. Dairugger is sent to defend, but eventually learns that the Galbeston are actually desperate for a new home, as their planet is doomed.

Like GoLion, Dairugger XV has been released in its original form on DVD in R1, as ''Armored Fleet Dairugger XV". It was released in 3 "collections" (consisting of 3 discs each), but as of mid-2018, only the first collection is easily available.

Towards the end of 2019, Bandai Spirits has put up subbed episodes on their official Youtube channel.