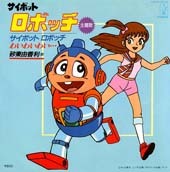 A 1982 gag anime created by Ken Ishikawa and produced by Knack Productions. It ran for 39 episodes on TV Tokyo from October 1982 to June 1983.

It focuses on a mischievous "cybot" named Robotchi who lives in Yamakawa Village. The village is home to Dr. Deco, the inventor of Robotchi and many othercybots, Sachiko Yukino, a smart and hot female cop, and Kurumi Yukino, Sachiko's younger sister who's friends with Robotchi. For the first 20 episodes, the main antagonists are the Industrial Espionage Trio, a group of 3 spies who try to steal Robotchi's blueprints, but are constantly foiled by Robotchi and Sachiko. For the last 19 episodes, the villain role goes to High Brow and his henchmen, Nancy and Silvia.

In 1985, it was dubbed into English and turned into an hour and a half long direct-to-video movie called Robby the Rascal by Kidpix Productions, which can be viewed here

(roughly translates to The Adventures of Mischievous Robby) in 1989. The entire series was also aired in Italy and became very popular there under the title Robottino.