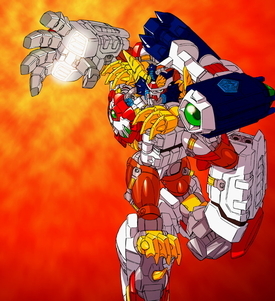 An action/adventure anime series created by Aeon and Takara and aired in 2002.

In the future robots are commonplace, and a tournament exists where Battle Robots are pitted against each other in battle. A boy named Akira Akebono wishes to win the Titan Belt by using the robots designed and built by his grandfather, Hajime. Akira fights using the Animal Unit; Bulion, Eaglearrow, and Drimog, until one day Hajime gives him a new robot, Ryugu. Ryugu is just as stubborn as Akira and the two clash, however he can also combine using the Cluster System with the new dragon robot Daigu to become Daigunder.

Akira and Ryugu become better partners and the team does well in the tournament. Along the way they're joined by three more robots, the Dino Unit; Bonerex, Despector, and Trihorn, who Hajime remembers he created earlier before making the Animal Unit.