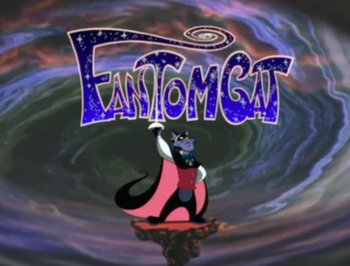 This cat can save the world!
"The year was 1699. High in Castle Fantom, two sworn enemies engaged in mortal combat. But for one valiant hero, the fight would end in a cruel twist of fate - trapped within an evil spell, powerful enough to endure the passing of centuries. Until the dawn of a new millennium heralds the return...of Fantomcat!"
— Opening narration
Advertisement:

Fantomcat is a 1995 animated series made by Cosgrove Hall and Anglia Television for CITV, lasting for two seasons and made as an Affectionate Parody of cartoons like Batman: The Animated Series and Gargoyles.

The series centres on the character Phillipe L'Entrique Elan de Chanel, Count Givenchy and the Duke de Fantom, a masked swashbuckling hero who thrived in 1699, in mortal combat with his nemesis Baron Von Skelter within his home, Castle Fantom. Phillipe was treacherously cast into a painting by the Crystal of Malevolence, a stone so powerful that it can change worlds, and became trapped for 3 centuries. As the years passed, the area around Castle Fantom became a bustling metropolis called Metrocity, a city submerged in crime rings led by the fiendish arachnid Marmagora. It's at midnight on December 31 1999 that Fantomcat is freed from his prison and joins up with Tabitha "Tabs" Wildcat, a stern feline detective who had grown up idolising Fantomcat, MacDuff, a timid Scouse mouse who hates holes, and Lindberg, an indecipherable, acrophobic pigeon, to fight the evil that has grown in modern times.

On December 13th, 2021, British streaming service BritBox announced they would have the show for streaming

in January, every episode, bar "The Manhattan Incident" due to it featuring the Twin Towers as a plot point.

Not to be confused with Fantadroms, though incidentally both star cat-themed protagonists.