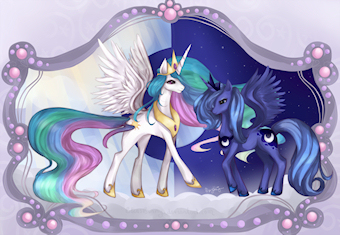 A winged unicorn is a unicorn with wings. The idea would be to combine all the mobility of a flying creature with grace and rarity of a unicornnote and occasionally magical ability. Terms for these creatures include pegacorn, unipeg, unisus, and cerapternote  keros (horn) + pteros (wing), but the most familiar term to use for this species is "alicorn", which is a combination of the French words for wing (aile) and horn (corne).note Note that in French, the word for unicorn is also licorne. However, be careful with this usage because the word alicorn also refers to the horn of a unicorn itself.

Winged unicorns tend to be portrayed as something more special and unique than "regular" unicorns. In settings where a cohesive society exists among these creatures, the presence of winged unicorns may indicate a (benevolent) hierarchy where they're usually top of the pecking order. In fantasy universes featuring humans, winged unicorns often serve as the Cool Horse, and will indicate that their rider is super-special.

Generally, they are rare — too many of these critters running around your fantasy world might make a work seem juvenile, since it's a melding of two magical creatures little girls generally adore. Likewise, an overabundance of something meant to be special and wondrous risks making it seem mundane. It's more likely to be a one-off creature with an unusual background (a "freak" unicorn or pegasus, a mysterious race in itself, or the result of powerful magic). It's surprisingly uncommon for them to be the actual hybrid offspring of a unicorn and a pegasus, but it does happen.

A Sub-Trope of both Unicorn and Pegasus, and also Hybrid Monster.