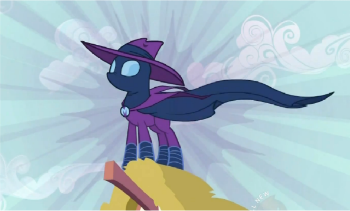 "I am the terror that trots in the night!"
Mayor Mare: A mysterious mare, that has done well by our fair city today. I dub this new masked hero: The Mysterious Mare Do Well!
Written by Merriwether Williams
Advertisement:

One morning, helmed by Scootaloo, the Rainbow Dash Fan Club begins a hearing to officially declare Rainbow Dash as the most awesome pony in all of Ponyville. When Snips objects, preferring to call Rainbow Dash the most stupendous pony, a short argument unfolds, eventually resulting in an anonymous suggestion of "superultraextremeawesomemazing" by a certain cyan Pegasus.

Satisfied with her work, Rainbow Dash begins a relaxing cloud-swim... only to be interrupted by the sounds of a distressed filly coming from a well below. Without hesitation, she dives into the well, easily rescuing the filly, and is met by a crowd of cheering ponies as she emerges. Blushing, she flies off, to the praise of Scootaloo, Snails and Snips.

Later in the same day, a baby carriage goes careening off a steep road, heading straight for a cliff. Once again, Rainbow Dash is on hoof to save the baby, and once again a cheering crowd meets her. This time, the praise goes to her head, and she poses and shows off to the crowd and cameras, to the bemusement of Applejack and Twilight. Yet another disaster strikes soon afterwards, wherein a group of elderly ponies find themselves on a collapsing balcony.

By this point, Rainbow Dash is actively egging on the crowds, while her friends lament her increasingly inflated ego. As she gives interviews and poses for the paparazzi in Sugarcube Corner, she even hires Spike to ghostwrite her autobiography. Twilight and Applejack are less than amused with her bragging and arrogance...

Later, as she signs autographs for a line of waiting fillies, a plummeting Twinkling Balloon carrying a screaming mare gives Rainbow Dash another chance to perform a feat of heroism. Before she can get to the balloon, however, a mysterious pony in a mask and cape appears and saves the panicking pilot, leaving Rainbow to crash into the deflated balloon. The heroic pony vanishes as quickly as she came and the mayor declares her to be Mare Do Well, Ponyville's newest hero. The crowd cheers... except for Rainbow Dash, who bitterly snubs the new hero.

Things quickly become worse for Rainbow Dash as Mare Do Well outperforms her in every regard. When a carriage filled with tourists goes flying down the steep road, Rainbow flubs the rescue whereas Mare Do Well effortlessly stops the carriage with her superior physical strength. A construction site devolves into pandemonium as a haywire crane and a collapsing structure put the workers in danger, and although Rainbow Dash manages to rescue one colt, Mare Do Well saves four in the same span of time, displaying an uncanny level of prediction. A leaky hydroelectric dam is easily plugged by Rainbow Dash, only to completely burst when she stops to compliment herself, leaving Mare Do Well to not only rescue Dash, but use unicorn magic to single-hoofedly repair the dam. Rainbow Dash's frustrations are only increased when, as she shows off her ability to fly, unlike Mare Do Well, the caped crusader herself flies by as well, now sporting pegasus wings.

Back at Sugarcube Corner, Twilight, Fluttershy, Applejack and Rarity sing praises about Mare Do Well. An agitated Rainbow Dash refutes their claims, declaring herself to be a better hero than Mare Do Well, only to be called out on her jealousy by the others, including Spike. Unfortunately, there aren't any disasters that need heroism to be found, leaving Rainbow Dash to perform acts of 'heroism' such as pushing Granny Smith across the street (she didn't want to cross), opening a jar of peanut butter (Amethyst Star easily opens it with her magic), and mowing the lawn.

Dejected and alone, Rainbow Dash sulks on a raincloud, only to be interrupted by Scootaloo, who invites Rainbow Dash to Mare Do Well's thank-you parade. Quickly formulating an idea, Rainbow Dash follows her, and when Mare Do Well appears on stage, Rainbow confronts her and demands to remove her mask. A chase quickly begins throughout a secluded alley, and although Mare Do Well manages to lose her several times, Rainbow eventually corners and pounces on an unassuming Mare Do Well, and unmasks her to reveal... Pinkie Pie?

Not only that, but two more Mare Do Wells appear and reveal themselves to be Twilight and Applejack, soon joined by Fluttershy and Rarity. The five reveal that they all had a hoof in the plan; Applejack's strength saved the bus, Pinkie Pie used her Pinkie Sense to save the construction workers, Twilight magically repaired the dam, Fluttershy performed the fly-bys, and Rarity made the costumes. Rainbow questions why they would appear to force her out of the spotlight, and they reveal that although they enjoyed seeing Rainbow as a hero, her constant bragging and arrogance was uncalled for.

Realizing her mistakes, Rainbow Dash begins to write a letter to the Princess, only to be cut off by Spike, who had already penned a letter in advance. When he insists on using his version, Rainbow Dash scares him off with a lighthearted prank, and begins writing her own version.

Josh Scorcher points out that Rainbow Dash wasn't in any danger at all since she was a Pegasus and could fly. And uses footage from Team Four Star to make his point across.

Example of:
Forgot About His Powers

Josh Scorcher points out that Rainbow Dash wasn't in any danger at all since she was a Pegasus and could fly. And uses footage from Team Four Star to make his point across.