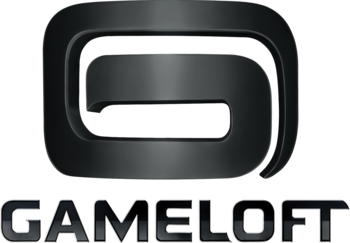 Gameloft S.A. is a developer of portable titles that are playable and graphically polished but not quite perfect reproductions of titles such as Halo, Final Fantasy XIII, Burnout, Diablo, and many others. They are an offshoot of French megadeveloper Ubisoft (the two companies' founders are brothers), and thus are also responsible for creating portable versions of Ubisoft's franchises, such as Assassin's Creed and Rayman 2: The Great Escape. Some of their games are even licensed titles in their own right. Their Mario Kart clone, for example, stars the cast of the Shrek movies, one of their Temple Run clones, has the Minions, and their copy of the Batman: Arkham Asylum series is a tie-in for The Dark Knight Rises. They've also partnered with Hasbro to make Littlest Pet Shop and My Little Pony: Friendship Is Magic games. In more recent memory, they've partnered with Disney for multiple different games that combine their IP into a single setting.

This formula has made Gameloft one of the most successful mobile developers, but the message Gameloft's success sends makes them one of the most controversial. To console and PC developers, it says that gamers want mobile versions of all these games, and if Gameloft doesn't provide them, someone else will. The actual quality of their games is mixed, characterized by high production values for iOS Games but weak voice acting and story, and slightly outdated gameplay mechanics.

Considering that many of the games they copy of are nowhere to be found on iOS devices (with some exceptions; Grand Theft Auto III, for one, has been released on the iOS and Android), Gameloft is in fact one of the few companies that is making the iPod a competitive gaming device. They also freely admit to copying other games, defending themselves by pointing out the lack of originality in the rest of the game industry.

Given that the company itself was established by one of the Guillemot brothers, it wouldn't be surprising for Gameloft to come up with a portable remake of a popular Ubisoft title, albeit usually with an altered storyline and gameplay - for example, the mobile Splinter Cell games differed significantly from their home console and PC counterparts, although the basic premise remains the same. They appear to have done away with producing mobile versions of Ubisoft properties starting in the early 2010s, however, as games starting from Assassin's Creed IV: Black Flag no longer have mobile counterparts, with Ubisoft themselves developing companion apps and/or portable spinoffs based on their games.

They are now moving into downloadable console titles, publishing games like Dungeon Hunter Alliance and Modern Combat for the PlayStation 3, as well as Let's Golf 3D for the Nintendo 3DS. They have also developed a few licensed games away from their mockbuster games like LEGO Legacy: Heroes Unboxed.

Their monthly Gameloft Video Podcast can be found on their YouTube page.

A wiki for the Gangstar series can also be found here