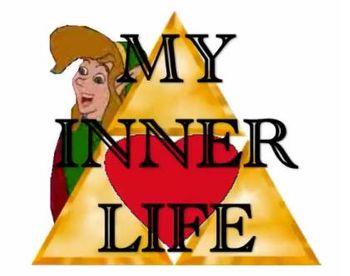 Please wake up, Link...
"Dreams come in many forms. Some good, some bad, some very realistic, even ones that feels very real."
—Prologue.
Advertisement:

My Inner Life is a The Legend of Zelda fanfic written at some point between the late 90s and early 2000s. It has gone down in history as one of the most memorable stories of its type ever written. It all started when a starry-eyed fangirl known as Jen began to have lucid dreams about Link and believed they were a real second life she lived, writing them down to share them with the world.

The story followed the exploits of a girl named Jenna, a traveling merchant who meets and falls in love with Link Silverblade (that's his last name now). She then proceeds to marry him, have lots of sex with him while grunting like tigers in heat, and bear his babies. Along the way, the couple takes part in a bizarre bonding ceremony, battles Dark Link, and discovers that Jenna is descended from a race of magical people who can control the elements.

The author never actually finished the story, but it lives on in the memories of many traumatized and amused Zelda fans. The story, plus a shrine to the author herself, can be found here

. You can also hear an incomplete Dramatic Reading here

. In February 2021, mutant museumnote formerly manwithoutabody, who did the very first Dramatic Reading (some of which is still available on archive.org, but is no longer available on YouTube), began a remake, which is being re-uploaded with the sex scenes cut out here

after the story got his channel terminated, presumably due to the story's explicit content.

If those aren't enough to quell your interest, there is also a reenactment in The Sims 2, part one of which can be found here

. Also recommended is this sporking

Adaptations of My Inner Life are troped over here.

My Inner Life provides examples of: