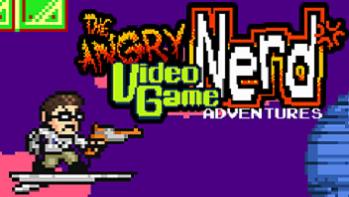 "I feel like I've played every bad game I ever played all at once. And now others are playing it. Because of me! It's like I shared all my horrible experiences! It's All My Fault! Fuck this game!"
— The Nerd himself, after beating the game in his own show.
Advertisement:

The most rewarding game of the year.

The game's story is appropriately minimal. The Nerd is playing a shitty game with his friends when the TV abruptly sucks them inside; he escapes to the basement, but an arm reaches out of the TV, grabs him by the balls and pulls him inside as well. In this place (termed "Game Land"), he must fight through eight levels, each incorporating bits and pieces of some of the games he's covered, in order to get back to the real world and fight the one who trapped him in the first place.

Despite being a Licensed Game, and intentionally referencing some of the poor design choices the Nerd detests, it's actually a very fun (if difficult) game. The Nerd himself has reviewed it rather positivelynote (for about three minutes, at least, and then he started swearing at it again), along with several other games based off of himself.

A sequel titled The Angry Video Game Nerd II: ASSimilation was released on March 29, 2016. A trailer is available.

You are a fucking video game god. We bow to your mastery. No person on Earth can match your skill. We all want to be like you. Holy shit you're amazing. Holy fucking fuck! Stop what you're doing right now and take a picture of this screen because nobody will believe you beat it on YOLO. Way to go you fucking nerd!!

Thy Farts Consumed is a Hell-like world in Game Land full of hit-demons and massive lava sharks where the Nerd fights the Devil.

Thy Farts Consumed is a Hell-like world in Game Land full of hit-demons and massive lava sharks where the Nerd fights the Devil.