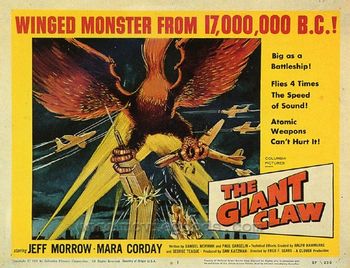 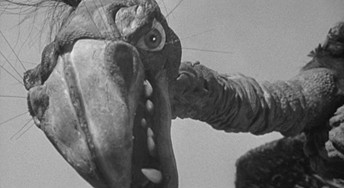 Can you spot the difference? (Hint: The poster doesn't show the monster's head...)
Advertisement:

What monster, out of the innumerable B science-fiction/horror films from the '50s and '60s, can possibly hope to compete with Ro-Man — the man in a gorilla suit wearing a toy plastic space helmet — from Robot Monster?

Four words: Giant. Antimatter. Space. Buzzard.note This decision is currently being appealed by attorneys representing the Giant Killer Bunny Rabbit union, who could not be reached for comment.

Test-pilot/electronics engineer/physicist Mitchell "Mitch" Macafee (Jeff Morrow) is piloting a jet over Canada when he spots a UFO ("As big as a battleship!!"). His girlfriend on the ground Sally Caldwell (Mara Corday), however, sees nothing on the radar. Jets are scrambled to investigate his claim, but one goes missing. Mitch's commanding officer isn't pleased with him — and is even less so when another plane disappears in the same area.

En route back to the United States, Mitch and Sally's plane is attacked. Screeching is heard. They crash-land on a farm but survive unscathed and are taken in by a redneck named Pierre. More screeching is heard. Mitch and Sal go outside and find Pierre lying on the ground in terror near his spooked livestock. He claims to have seen the mythical witch La Cargagne, an omen of his impending death.

Finally arriving back in General Buskirk's office, Mitch is surprised to discover that his story about a battleship-sized UFO is no longer dismissed as pure fallacy. Another aircraft, this time carrying a bunch of investigators, was lost shortly after the pilot radioed a distress call that a bird the size of... wait for it... a battleship, was attacking the plane. Not to mention some googly-eyed pictures snapped by a high-altitude balloon's camera.

Thus we finally get our first glimpses of the beast that would put the combined worst of the bestiaries from every Dungeons & Dragons Monster Manual to shame: a mighty battleship-sized phoenix from outer space, that flies faster than the speed of sound, that emanates a force-field of antimatter protecting it from all that the military can throw at it... as embodied by a puppet that looks like Buzz Buzzard's evil twin.

It's time for women to gaze at the sky and pretend to scream in terror, for model cars and trains to be awkwardly plucked off papier-mâché sets, and for a scheme "so crazy, it just might work!" to be contrived to defeat the bird.

This movie is simply priceless. It's got everything that a comedy movie disguised as a B science-fiction/horror movie from the 50s should have; a completely ridiculous monster, laughable dialogue delivered with total sincerity, copious use of mismatched stock footage, gobs and gobs of pseudo-scientific Techno Babble... you name it. All that's missing is the Fauxlosophic Narration. Although the actors' ruminations on their careers upon seeing the monster for the first time might've been entertaining.

Because... perhaps most priceless of all is the fact that all scenes with the actors were filmed first — and then the scenes with the puppet were spliced in. None of the cast actually saw what they were supposed to be terrified of until they attended the film's premiere. Reportedly, Morrow, upon hearing the audience's reaction, left the theater early with a red face hidden beneath a turned-up collar, afraid that someone might recognize him. Supposedly, he went home and got drunk.

By the way, it was released by Columbia Pictures — also responsible for Lawrence of Arabia and Jason and the Argonauts. This is the one that tends not to be mentioned in the studio-anniversary clip shows.

It got an episode

on a Mystery Science Theater 3000 fan series. James Rolfe, however, gives a fine insight on it.