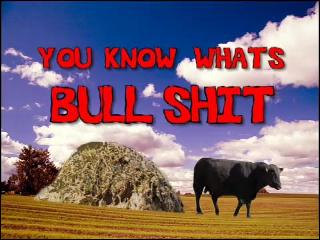 You know what's bullshit? This page. And we're gonna tell you all about it...

You Know What's Bullshit? is a Web Original video series by James Rolfe. It's one of his most popular series after The Angry Video Game Nerd and, while not as legendary as AVGN is, has gained a cult following.

Keeping with his famous Caustic Critic/Accentuate the Negative formula, Rolfe in this series spends each episode complaining about everyday annoyances that are "bullshit", such as pay toilets, malfunctioning printers, shoelaces, and movies about penguins. While the earliest rants were done by Rolfe as himself, in the faceless filming style that's a trademark of AVGN, the show later developed a separate character for him to play, simply called the Bullshit Man (three guesses as to what his head's made up of).

The series had an initial 2007-2012 run before going on a two-year hiatus and returning for six more episodes from November to December 2014, then returning again in November 2016. It would then do one-off episodes between 2016 and 2020, and as of May 2020 new episodes are uploaded monthly.

You can check out the series here.

You know what's bullshit? These examples.

Before he ends the "Too Much Cream Cheese" episode, the Bullshit Man builds up the courage to reveal his face to the audience, which is literally a mound of bull shit.

Before he ends the "Too Much Cream Cheese" episode, the Bullshit Man builds up the courage to reveal his face to the audience, which is literally a mound of bull shit.