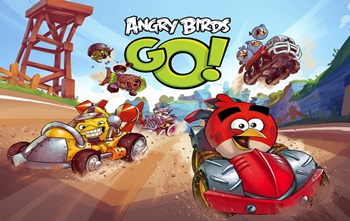 Angry Birds Go! is a Mascot Racer Spin-Off of the Angry Birds franchise, most notably it's the first completely 3D game in the series.

The story goes simply that the pigs are having a racing competition for a delicious cake. The birds come across it, like the cake as well and decide to join in. Yeah, that's about it but hey, at least both sides aren't fighting over eggs this time.

The game is a one lap sorta downhill racer where you guide your selected character in handcrafted carts to make it to the finish line. The modes are as follows:

The more races you win, the more coins you get to upgrade your ride and qualify for other events. There's also challenges once the main modes (save for Vs and Champion Race) are beaten five times.

An interesting thing about the game is that it's more based on character than it is the karts as they all share the selected kart beforehand. Each character has their own special move, which makes for some good strategy on who to use for certain races. The game was soft-launched in New Zealand on November 26, 2013 and in Australia a day later and was released worldwide on December 11, 2013 for iOS and Android and December 24 for Kindle Fire and is free to play. The game also supports the Telepods (first seen in Angry Birds Star Wars II) where you can buy the toys and place them on your tablets to unlock characters.