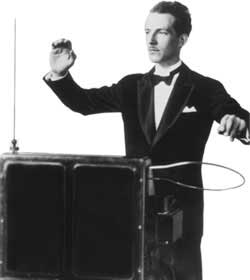 Leon Theremin playing the instrument he invented.
"No instrument says 'You're in outer space!' more than a small cigar box with a radio aerial stuck to it."
— Mark Kermode
Advertisement:

(a.k.a. termenvox) is an electronic instrument developed in the 1920s, notable for being the only musical instrument played without touching it. The player waves their hands near its antennas, using the electrical conductance of the body to alter the sound. It creates a very pure tone, and sounds like a lower-pitched version of someone tuning in an old-fashioned radio to a test signal. It's essentially a primitive analog synthesizer with an Unusual User Interface, or a Real Life Bizarre Instrument.

The retrofuturistic and haunting sound of the Theremin is closely associated with Speculative Fiction and horror from the black-and-white era, but it shows up in some very odd places.