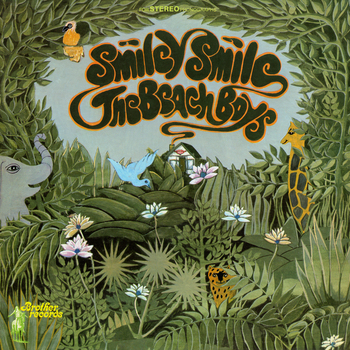 Guaranteed to give you good vibrations.
Advertisement:

Smiley Smile is the twelfth studio album by The Beach Boys, released in 1967. It was recorded and released after the collapse of SMiLE. The band tried a minimalist approach for the majority of this album, contrasting significantly from the grand productions of "Good Vibrations" and "Heroes and Villains", both of which were belatedly given an LP release on this album.

Upon release, while it did very well in places like the UK, it didn't do so well in the US. Receiving generally mixed reviews, it has since been Vindicated by History, becoming a cult and critical favourite, and it's credited as an early example of Lo-Fi music.

A forum dedicated to The Beach Boys

was named after this album.