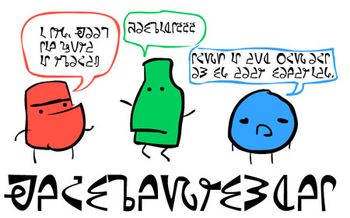 This is likely the clearest conversation they have ever had.

Grumble is a webcomic written by Agent#1 of clanBOB fame. This comic is unique, for several reasons. The main one being that while the comic itself has text, the text is unreadable.

Well, not completely unreadable. There are still words and such. They're just in a rather confusing cipher. The point of the webcomic is to emphasize the actions over the characters more than the words: the text, while technically translatable, is simply to show that something is being spoken in that space. You can make up your own dialogue if you'd like: Agent doesn't really care.

. Please give it a while to sink in — it typically isn't something most people get in a day, but it tends to grow on you.

This Webcomic Provides Examples of: