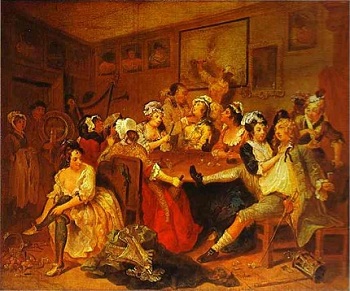 by William Hogarth
Dean: Hey. Relax!
Castiel: [This strip club] is a den of iniquity. I should not be here.
Dean: Dude, you full-on rebelled against Heaven. Iniquity is one of the perks!
— Supernatural
Advertisement:

Also known as a "house of ill repute", a Den of Iniquity is typically a room, auditorium, or stadium in the Evil Overlord's Evil Tower of Ominousness or Island Base where all sorts of sin and wrongdoing takes place. Although towers are in short supply nowadays, if the Big Bad happens to make and/or enforce the laws they might have one in their mansion (but explaining them to less debauched guests might be tricky).

The level of debauchery will vary according to the setting in question; family-friendly stories might make it a lounge for the Mooks to gamble, get drunk, and brawl (not necessarily in that order), while Darker and Edgier works might go for rape, torture, and blood sports.

The Den of Iniquity is often a hangout for the Mooks or Faceless Goons who need something to keep them entertained when they're off-duty. On the other hand, whether the Big Bad or The Dragon indulges in the debauchery depends on where they stand on the Sliding Scale of Antagonist Vileness.

Often populated with the Paid Harem and Bodyguard Babes. The Den of Iniquity isn't restricted to "evil" characters (as Miss Kitty can usually attest), but most heroes will simply find it beneath them.

Specific underground locations are the Torture Cellar and Locked in the Dungeon. Compare Opium Den. Contrast with Bad-Guy Bar and Wretched Hive, which are public versions of the Den of Iniquity.