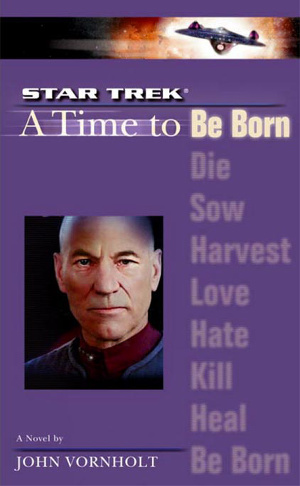 A series of nine novels in the Star Trek Novel Verse. A Time To... is a Star Trek: The Next Generation miniseries covering the events of the year leading up to Star Trek: Nemesis. The series consists of four duologies (each telling a mostly standalone tale, yet also contributing to an overall arc) and a final novel tying it all together. The series continues the story of the Enterprise crew and the changes that took place prior to Star Trek: Nemesis, e.g. Riker and Troi becoming engaged. Besides leading into "Nemesis", the series also sets the stage for the continuing stories set after the film, such as Star Trek: Articles of the Federation, the Star Trek: Titan series, the Star Trek: The Next Generation Relaunch, and others.
Advertisement:

Each book is titled after a line in The Book of Ecclesiastes, popularly known through the Byrds' song Turn! Turn! Turn!.