Literature / The Eye of Argon 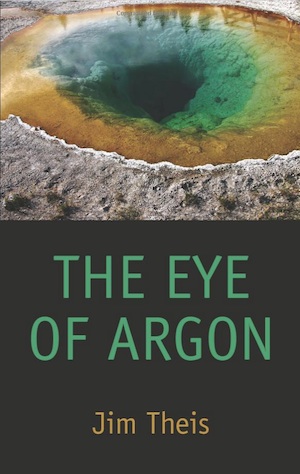 "Grignr slipped his right hand to his thigh, concealing a small opague object beneath the folds of the g-string wrapped about his waist. Brine wells swelled in Grignr's cold , jade squinting eyes, which grown accustomed to the gloom of the stygian pools of ebony engulfing him, were bedazzled and blinded by flickerering radiance cast forth by the second soldiers's resin torch."
Advertisement:

Described as "the worst fantasy novella ever", The Eye of Argon

is a story by then 16 year-old Jim Theis. It's the tale of Grignr, a foul-mouthed barbarian warrior who is trying to escape the dungeons of Evil Overlord Agaphim and rescue a young woman named Carthena from a pagan cult who want to sacrifice her to their idol — a statue with one eye called "The Eye of Argon". (A "scarlet emerald

", complete with some interesting plumbing.)

Published in the fanzine OSFAN 7 in 1970, the story is well known for its abundant cliches, shoddy spelling, flat characters, wooden dialogue and overly colourful writing. Every woman is a "wench", eyes are "emerald orbs". Almost nothing is ever "said" — instead it is "queried" or "ejaculated" or "husked" or "stated whimsicoracally". There's an extended scene involving elderly priests groping Carthena, and a scene where Grignr has sex with (or possibly just hugs) a "half-naked harlot... with a lithe, opaque nose". One cult member randomly faints from an epileptic fit in battle, and another suffers a savage, multi-paragraph Groin Attack.

The most widely-known and circulated copy of the story comes to an abrupt and unsatisfactory halt, and for many years it was believed that the ending was lost forever (or even, in some quarters, that the story was never completed). Recent years have seen the separate discoveries of two intact copies of the fanzine in which The Eye of Argon debuted, so it is now known how the tale ends. (With multiple exclamation marks, it turns out.)

At science fiction conventions, The Eye of Argon is now a sort of parlor game. All participants sit in a circle with a hard copy of the story, and the first one starts reading aloud — pronouncing every word as it's misspelled, and including every adjective. When they finally burst into laughter, the copy is passed to the next person. If a person manages to make it through more than a page, the copy is sometimes passed anyway, on the grounds that the reader must have special training as a news anchor.

, not perfect but quite a bit better, has long been in circulation, with a transcriber's note apologising for its inability to reproduce the original's equally awful typesetting and illustrations. It is now also possible to view a facsimile copy

of the original publication, in all its strangely-set and oddly-illustrated glory. This facsimile does include the lost ending.

You can also purchase an authorized print edition

As reading it raw may cause brain damage, you can settle for the MST'd version

(by Adam Cadre) which naturally calls out many of the tropes listed here, and it's not hard to find dramatic readings of it on YouTube. It also got the treatment

from Let's Drown Out, and a whole season of the podcast 372 Pages We'll Never Get Back reading through it from start to finish. For those who are unable to read it sober, we have the Drinking Game over here. An example of the game can be found here

. Geoff Bottone actually wrote a version of the story called Grïgnyr the Ecordian

, which aimed to make a compelling version of the story that Theis probably envisioned in his head.

Geoff Bottone's Grïgnyr of Ecordia: A Retelling of The Eye of Argon adaptation has examples of: