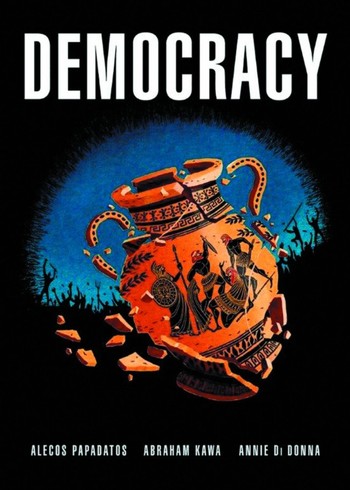 The world was broken, as suddenly as a vase fallen from its shelf.
Advertisement:

"If we stand for anything, it's the fact that it doesn't end! It never does!"

Democracy is a comic book written by Alecos Papadatos, Annie Di Donna (who have also worked in Logicomix) and Abraham Kawa in 2015.

It opens on 490 B.C. with Athens at war. More specifically, the night before the infamous Battle of Marathon. The Hero of the story, Leander, who has witnessed the transition from tyranny to democracy, retells this story to his friend, in order to calm him down, but along the way, he attracts a bigger audience.

He starts back when he was still a teen and he lived with his father, Promachus, and his two slaves, Nefert and Gavrion, in Athens. That's until his father is murdered during a rebellion (where one of the tyrants is murdered as well) and he is forced to flee and seek help to Delphi, hoping he would find help.

Unfortunately, he discovers that Delphi isn't what he thought it would be (and that is confirmed through meetings with Hero, a Pythia in training). On an attempt to find a solution to his problem, he comes in contact (and developed a bond) with Goddess Athena, the patron goddess of his city-state.

Alongside, he meets Cleisthenes, an ostracized citizen, who plans on returning to Athens and take matters into his own hands, convincing the now adult Leander to come with him and help him.

The idea for the story was given when Alecos helped his daughter write an essay about Cleisthenes and the birth of Democracy. It is, by far, his last work, as he currently works on a graphic novel about the life of Aristotle.

Not to be confused with a video game by the same name.

''And whatever idea we're on our way to… I have no word to describe it.''