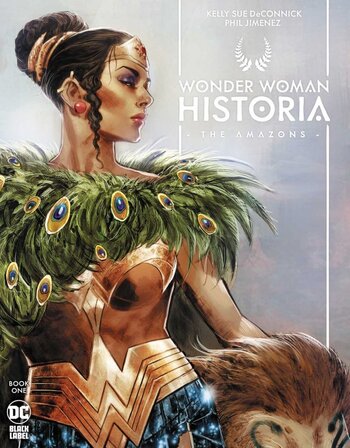 Hail to the Queen
There is no objective version of history.
Neither this one, nor that.
But this... is our story. The Amazons' ἱστορία. And it begins...
Opening narration of the first issue.
Advertisement:

Presented as a "Homeric" epic. The series looks to tell the the true history of Queen Hippolyta and the Amazons, before Steve Trevor washed up ashore on Themyscira.

Millennia ago, Queen Hera and the goddesses of the Olympian pantheon grew greatly dissatisfied with their male counterparts…and far from their sight, they put a plan into action. A new society was born, one never before seen on Earth, capable of wondrous and terrible things…but their existence could not stay secret for long. When a despairing woman named Hippolyta crossed the Amazons' path, a series of events was set in motion that would lead to an outright war in heaven—and the creation of the Earth's greatest guardian!