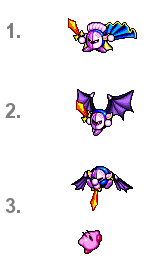 Probably because they look cooler, these wings often appear demonic or bat-like.

It might not always be clear if the wings turn into a cape or the cape turns into wings. It's best not to think about it.

Some examples take this even further, making the cape a form of Morph Weapon, capable of turning into many different things. They may also function as a type of Wing Shield as a means to protect oneself or others.