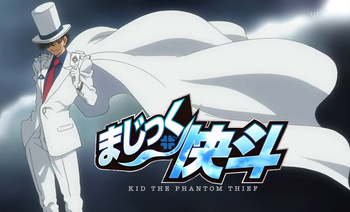 Magic Kaito is a shonen manga series starring Kaito Kuroba, an Ordinary High-School Student. He has a pretty sweet life: a small but nice house, a loving mother, and a childhood friend in Aoko Nakamori, whose father just happens to be a respected Inspector at Ekoda's Division Three. He's also incredibly smart, athletic and has fast fingers.

Everything's perfectly fine, until one day when he finds out about a recent resurgence by a local villain, a mysterious Phantom Thief clothed in white and famous for his signature cape, hat and monocle who specializes in using stage magic and street magic to steal his targets. Feeling challenged, he decides to find out all he can about the man.

That's when he stumbles upon the secret room in his house filled with props and innumerable pieces of junk. And also a white tux, a cape, a top hat and a monocle. Alarmed by the discovery of a veritable Bat Cave in his own home, young Kaito suits up as best he can and heads out to ask some questions. Turns out that the guy currently running around is not only an old friend of the family, but Kaito's dead father was the original Phantom Thief - until one day he was brutally killed in an 'accidental' explosion on stage. The old friend of the family, Jii, is under the impression something incredibly funny happened, and not anything particularly ha-ha funny either.

Well, turns out he's right, and now the only way to find out what happened is to lure the killers out into the open the only way Kaito knows how: by taking up his father's mantle and becoming the new Phantom Thief.

Sound familiar? It should. The Kaitou Kid also happens to be one of the most popular characters of Case Closed - the infinitely more famous detective show by the same mangaka, Gosho Aoyama. Magic Kaito actually began serialization in Shonen Sunday in 1987—seven years before Case Closed began—but the series went on hiatus after the first two volumes came out in 1988, and Aoyama only occasionally draws new chapters for it while working more continuously on Case Closed. The two series are set in the same 'verse, and since Magic Kaito volumes stopped being regularly produced, you can thank Canon Welding for his continuing existence and that of his peers.

A twenty-four episode adaptation produced by A-1 Pictures debuted during the Fall 2014 Season, which sees some technological upgrades (for instance, Kaito reads media coverage of his exploits on a smartphone and converses with his mother over Skype).