Pull a Rabbit out of My Hat 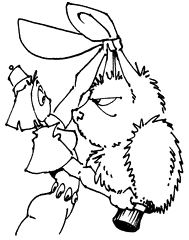 Must've got the wrong hat.
Bullwinkle: Hey, Rocky! Watch me pull a rabbit out of my hat.
Rocky: Again?
Bullwinkle: [tears off a shirt sleeve] Nothing up my sleeve. Presto!
[reaches hand into hat and pulls out the head of a lion]
Bullwinkle: No doubt about it, I gotta get another hat!
— Rocky and Bullwinkle
Advertisement:

One of the stock stage magic tricks, along with Saw a Woman in Half. The essence is very simple: the magician takes off his hat, shows it to be empty, reaches in, and pulls out a rabbit. Ta-da!

The trick can also be done to pull out something other than a rabbit, but a White Bunny is the iconic thing.

A common way for the trick to go wrong is for the magician to make a mistake and pull out something other than what he intended. Another common twist is for the rabbit to be discovered sitting on the magician's head when he takes his hat off.

In animation, the hat is often depicted as having some kind of Hammerspace portal in it, allowing the magician to stick his arm in up to the shoulder, and can contain much larger and stranger things than a mere rabbit. Another mutation is the Rabbit Magician, who may use the hat as a gate to its burrow or other domicile.

Rabbits are popular for this trick over other small animals (like, say, a cat) because they're better at sitting still for long periods of time. However, it should be noted that despite how it's commonly depicted, lifting a rabbit by its ears is very painful and could permanently injure them. It's also likely to ruin the act if they freak out. Normally they put the hand under the rabbit's belly or, if you must, lift by the scruff of the neck.

See also: What Have We Ear?