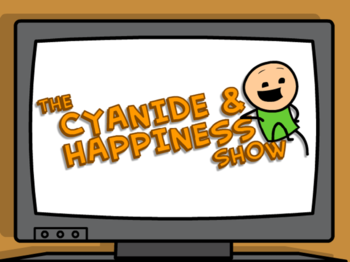 The Cyanide & Happiness Show is a web series based off the daily webcomic, Cyanide & Happiness. Since 2010, animated shorts based on the comic have been produced, gradually increasing in production quality until 2014, when the first season of a weekly ten-to-fifteen-minute series was announced and successfully Kickstarted

, reaching three times its goal of $250,000. As a stretch goal, for the entire year of 2014 shorts were produced on a weekly basis (excluding weeks in which full episodes were released). Each episode of the series tends to have one of two main sketches that take up most of the run time, and a few shorter sketches that act as interludes between them.

The first season of the show began airing on November 13th, 2014, yet due to a contract following the release of the second season, the long-form series is no longer available on YouTube. You can watch all three seasons on

VRV. However, the shorts are still available and can be viewed here

For more from the creators, also see The Stockholms, a show about a bank robber forming a familial bond with his hostages, and Purgatony, where a downtrodden man known as Tony judges souls that enter the afterlife in the office-like purgatory.