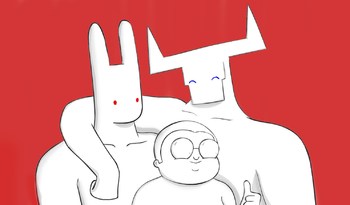 A Brazilian animated Webseries about the life and adventures of Cueio, a small rabbit who can transform into a humanoid version of himself. Almost all other characters are also small animals that turn into humanoids, except for Primo (Cousin), who's a human. It lasted 20 episodes and was posted in the YouTube channel Gato Galactico

The series got a 3D reboot aimed for children, named Turma do Cueio