Cockroaches Will Rule the Earth 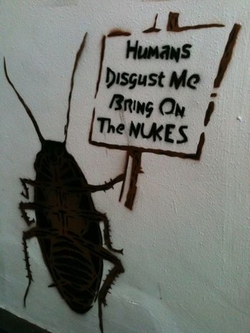 "You'll have to put up with Keith Richards, is that okay?"
"Give up? Give up? What are you saying to me? How come us roaches have been able to outlast the dinosaurs? How do we survive poison and persecution? How do we keep on crawling, in the face of overwhelming odds? I'll tell you how: because WE NEVER GIVE UP! A true cockroach never gives up. They can stomp us, they can pop us, but they'll never ever stop us. Someday the great H-bomb is gonna drop, and we'll have the whole planet to ourselves!"
— Joe's Apartment
Advertisement:

Very common in post-apocalyptic fiction or in events happening in the distant future, when no more humans are around and a new species has taken over the world. This species generally is or has evolved from a small, humble life form, often (though not necessarily) the cockroach.

This trope was frequent during the Cold War, when people feared that The End of the World as We Know It was near, and it was also discovered that cockroaches have much higher radiation resistance than human beings. Unfortunately for popular culture, it turns out that cockroaches have higher resistance to a sudden lethal burst, but are as subject to long-term fallout as most life. Further, as pointed out in Life After People, cockroaches are tropical to semi-tropical insects: their current extensive range is a consequence of humans heating their homes and businesses. With no humans — and more to the point, no artificial heating — around, cockroach populations would plummet fairly swiftly in temperate and colder areas once winter sets in. Worth noting here is that a nuclear war severe enough to wipe out humanity would also result in severe worldwide nuclear winter, making it a particularly devastating apocalypse for any heat-loving creature.