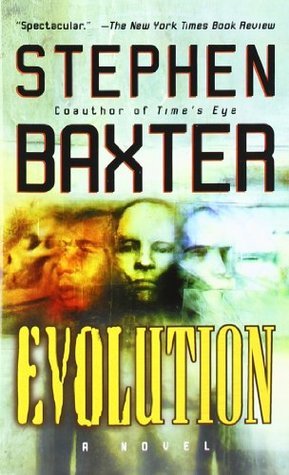 Evolution is a novel by Stephen Baxter spanning 645 million years of Earth's history, with most chapters focusing on sixty-five million years ago to thirty million years in the future. The book is split into three parts:

"Ancestors" focuses on various ancestors and predecessors of humanity, starting with a ratlike animal that coexisted with the dinosaurs and describing sapient Jurassic dinosaurs, the earliest social primates, African proto-monkeys carried to South America on driftwood rafts, the last of the polar dinosaurs, and the first apes to step out into the savannah.

"Humans" depicts various turnings in human development, including the slow development of tool use and intelligence, the invention of religion, the spread out of Africa and the clashes between the various human species, the dying of the Roman Empire, and the final collapse of modern civilization.

"Descendants" follows the Earth after the downfall of human civilization, beginning with soldiers awakening from suspended animation to find a barren world home only to feral posthumans and heading further into a strange ecosystem populated by monstrous rats and human animals before ending in the dying, dust-strewn wastes of the last supercontinent.

Not the Awaken Online story.