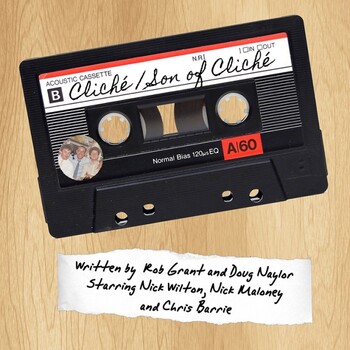 Son of Cliché, a follow-up to Cliché, was a radio comedy show on the BBC that ran for two series in 1983-84 (the original Cliché aired in 1981) and which was written by Rob Grant and Doug Naylor. Produced by comedy veteran John Lloyd, the show was presented by Nick Maloney, Nick Wilton and a young and relatively un-known Christopher Barrie, at that point famous only for being a vocal impressionist talent on Spitting Image. Musical interludes and comic songs were by Peter Brewis.

The show followed what was by now a well-worn path in subverting both the introduction and the end credits. As often as not, the end credits would be re-arranged into a song parody performed by Brewis with vocals by Chris Barrie, one week in the voice of Neil Young singing the credits to a tune not unlike "After the Goldrush". The next week, the gravelly voice of Bob Dylan performed the credits to a tune not unlike "Knockin' on Heaven's Door". This was not the end of the parody: at the end of the credits, where you might expect normal Radio Four service to resume, the second series featured a grovelingly apologetic Maloney or Wilton returning to the mike and apologising for the absence of the continuity announcer, who was indisposed for one reason or another.

As time passed with no sign of normal continuity, Wilton would get more acerbic and go into a detailed reason as to why the CA was indisposed. It might be due to a bad curry they'd had the night before, for instance, meaning they'd had to, er rush out of the studio in a hurry. Wilton would then be heard leaving the studio, walking down a corridor, pausing to say "sorry about this" to the listeners, and then a one-way conversation would ensue as to whether or not he could pass the mike over the cubicle door and you can, you know, do the link without getting up — and then the recording would end and the real continuity announcer would take over, often in a well-disguised huff because they hadn't been warned.

The show prided itself on "series within the series" in the best BBC radio comedy style.

At any one time there could be up to four of these, which included

Although Son of Cliché only ran for a relatively few series, it was a seminal moment in British comedy for two reasons. The in-show serial Dave Hollins - Space Cadet! provided enough material for a pilot show of a sit-com set in space that was to make the names of Grant/Naylor and which, starring Chris Barrie, is now into its twelfth series. Grant/Naylor would regularly plunder old Son of Cliché scripts for material, and on one occasion a Peter Brewis song, "Tongue-Tied", for their space comedy.

An archive of downloadable episodes can be found here