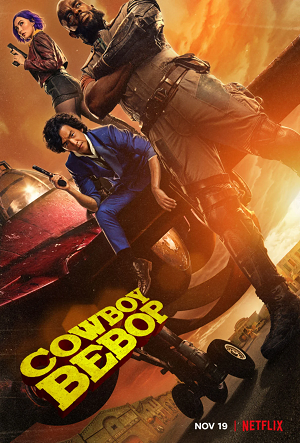 Whatever happens, happens.
"In this solar system, if the cops and the bounty hunters don't get you, the Syndicate will. There's no happy ending here."
— Spike Spiegel
Advertisement:

Cowboy Bebop was a shortlived Netflix Space Western series and the first Live-Action Adaptation of the anime of the same name. Christopher Yost (The Mandalorian) is the showrunner, with Michael Katleman and Alex Garcia Lopez directing. The ten-episode series premiered on November 19, 2021.

Like the anime, the show is set in a Used Future where humanity has colonized different parts of the solar system, and follows the adventures of a ragtag group of bounty hunters: Spike Spiegel (John Cho), a gifted fighter with a dark past, his friend and companion Jet Black (Mustafa Shakir), and enigmatic new addition Faye Valentine (Daniella Pineda). Together, they chase criminals looking for a nice payout, but struggle dealing with the police, the mafia and each other.

In addition to the show, a prequel novel titled Cowboy Bebop: A Syndicate Story: Red Planet Requiem was released on December 7, while the first issue of a tie-in comic line by Titans Comics was released on January 26, 2022.

On December 9th, 2021, three weeks after the series premiered, Netflix announced that the series had been cancelled

after just one season.

Woodcock: Are you good guys or bad guys?
Spike: Depends on who you ask.
Feedback