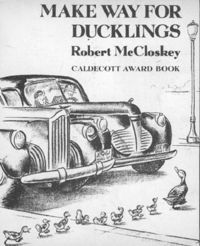 Probably one of the best known examples. Awwwwwwwwwwww.
A thing, accompanied by a smaller version of that thing, is always cute.
— #07 on Cute Overload's Rules Of Cuteness

note  Warning: Site is Exactly What It Says on the Tin. Even the most jaded tropers may experience Cuteness Overload.
Advertisement:

How do you make an animal instantly cute and endearing? Have it being followed by babies. Usually these babies are miniature versions of the parent. Sometimes there's a runt at the end.

One can make any kind of predator into a monster by targeting either the parent or one of the children. Strangely, however, even said predator can become cute once again if followed by babies of its own. That is, unless it's trying to eat you, at which a hungry monster followed by a bunch of little, hungrier mouths becomes downright terrifying.

Don't you dare get in between the mother and her children.