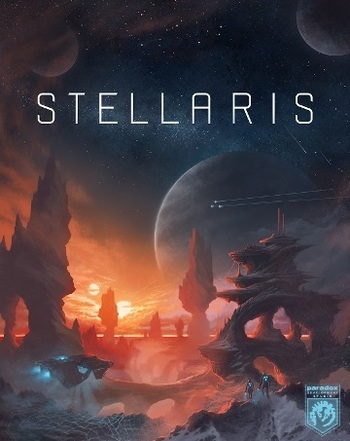 The galaxy is vast and full of wonders.
Take my hand, it's time to leave
From now on to eternity
We all know it gets hard to breathe
And how we got here's a mystery

So we leave the world we know behind
Behind
There's so much there to see
I hope you find what you're looking for
And you are not alone.
— Fourth anniversary trailer

Stellaris is a Science Fiction Space Opera real-time 4X Grand Strategy game by Paradox Interactive. It was officially announced at Gamescom in August 2015 and was released on May 9th 2016; in an unusual twist for grand strategy games, it later came to the PS4 and Xbox One on February 26th 2019. The game was developed by Paradox Development Studios and uses the same Clausewitz Engine that the studio has used since Europa Universalis III.

The game begins in 2200, roughly two centuries into the future. Featuring deep strategic gameplay, an enormous and highly customizable selection of alien races, and emergent storytelling, Stellaris has a challenging system that rewards exploration as you traverse the galaxy and discover, interact with and learn about the multitude of species you will encounter during your travels. The early game consists of exploring and colonizing, while mid-game activities generally focus on diplomacy and governing an empire. In the late game, crisis events can occur that have galaxy-wide implications.

One noteworthy feature of the game is the highly customizable setting even before a game begins. From the difficulty, to the size of the galaxy, to the number of AI civilizations.....the player gets to decide all these, and more.

Stellaris is under ongoing development and has DLC released regularly:

In addition to the game and its DLC, there are a number of other licensed tie-in products as well:

All the world's a stage,
And all the Humans merely players.
You are a player, are you not?