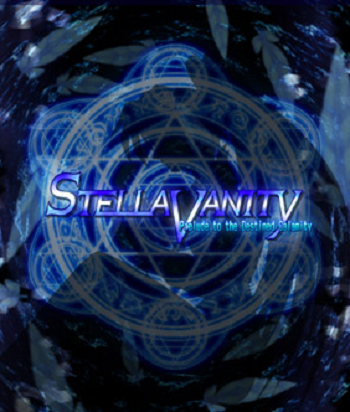 A Bullet Hell Shoot 'em Up that is simultaneously the successor to Crimzon Clover and Hellsinker, by the absurdly detail-oriented developer Tris-Gram. The game is notorious for its development cycle and various trial releases, during which the game has changed from a simple Espgaluda clone to an absurdly complex shmup with RPG Elements.
Advertisement:

A complete game based on trial versions 0.30 onward, known as StellaVanity : Prelude to the Destined Calamity, was released at Comiket 81 in December 2011 / January 2012. It was supposed to eventually have an English translation by the developer himself, but he nixed those plans, as well as English-language versions of his future games, after catching wind of the game being leaked to Western Image Boards, prompting complete cutoff with his English-speaking fans, leaving the game to be available only through the Japanese version of DLsite. However, things have changed since and the game was released

A sequel game based on trial versions leading up to version 0.22, known as StellaVanity D: Passage to the Isolated Moon (originally titled Stellavanity II), was in development since 2014. However the game was canceled in 2020/2021 and has since been replaced with an upcoming remake of the original game...don't ask when it'll come out.