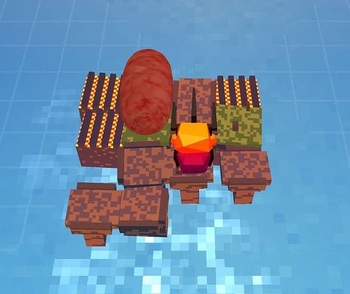 One of the game's first levels. Don't worry, it gets much worse.
"A simple 3D puzzle game."note Not so much "Blatant Lies" so much as "Metaphorically True". The game mechanics aren't complicated in and of themselves. However, the level design makes for very difficult levels, which are sometimes complex.
—The game's description
Advertisement:

Stephen's Sausage Roll is a independent puzzle game created by Stephen Lavelle. You play as Stephen (yes, named after the creator), a small man with a giant fork who wakes up on the beach of a mysterious island one day next to a crashed ship. This island is littered with statues and pedestals, heavily implying that Stephen is not the first visitor to this island. The question of how he got here is left unanswered, and the only way to make progress is by solving the puzzles presented to you. Along the way, the aforementioned pedestals reveal small bits of information about the fate of the island's previous inhabitants.

The game is a Block Puzzle of sorts. The goal of each puzzle spread throughout the game's overworld is to push each sausage around the level on to grills, so that each sausage is grilled once in each of four "spots" (each sausage is two tiles long, and has two sides it needs to be grilled on). However, if a "spot" is grilled more than once, the sausage will be burned, and pushing the sausage off the level will cause it to fall into the ocean. Both of these conditions will cause you to lose the level and have to either restart or undo the incorrect move you made. Much of the challenge in the game comes from navigating the often-small levels in such a way that Stephen can move around without getting stuck, and so that each sausage gets to where it needs to be.

The game is hard. It is very hard. It has been described by both fans and critics as "The Dark Souls of puzzle games," which is not an entirely inaccurate comparison. Each level is often set up in such a way that there is only one, very specific solution, and making one wrong move, even at the beginning of the level, will screw up everything that follows. It doesn't help that each new section of the game introduces a number of new mechanics before you've finished mastering the ones already in place. Still, there's an intense amount of satisfaction to be had when that "a-ha" moment hits and you finally figure out the solution to a puzzle you've spent hours on. As a result, the game has a devoted fanbase, and the creators of QWOP and The Witness have described it as one of the best games they've ever played.