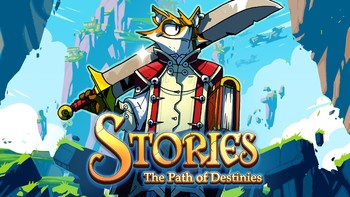 Stories: The Path of Destinies is an action-rpg made by Spearhead Games starring a lot of really badass Funny Animals with some heavy visual novel-style influence in the nature of its storytelling.

Reynardo is a retired sky-pirate in a land filled with floating islands, high above an endless expanse of blue skies. The Emperor has devolved into horrific, unspeakable rituals involving blood sacrifices and other dubious methods, and the resistance is desperately trying to stop him - for if he succeeds, the Emperor could very well unleash the Old Gods, horrific, monstrous beings that once ruled the islands.

Reynardo is forced to come out of 'retirement' and in his attempts to help the resistance, he manages to pick up a mysterious book, and before he knows it, he's thrust into a sprawling, multi-layered adventure with many, many different outcomes. Reynardo loves, lives, and repeatedly dies as his choices lead him to his doom... before being sent back to the moment he opened the book for the first time. Reynardo doesn't understand it right away, but he soon figures out that the book is showing him alternate universes, and that it's up to him to find a future where he preferably doesn't die, and the Emperor is defeated.

The breadth of Stories's gameplay is an action-rpg as Reynardo hacks and slashes his way through the armies of the emperor, powering himself up to become as strong as he can be. At many times throughout the story, you're offered a choice from one of a few options - the path you pick will then splinter off into one of twenty-four wildly different endings - in one, you may become an all-powerful legend of a man, and in another, you may die alone in a dungeon. Each ending can give you crucial information, key to unlocking the best timeline possible and more upgrades.

Has a spiritual sequel by the same company called Omensight.

What trope do you pick?