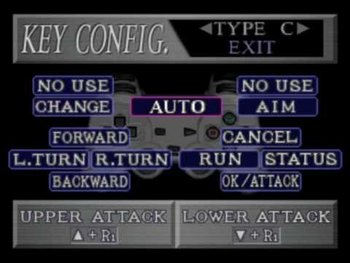 Even in a Zombie Apocalypse, you can't move and turn at the same time.
Advertisement:

Controls in a video game (usually from the Fifth Generation) that don't allow you to turn and move forward at the same time, much like a tank or a tractor.

At one time, turning a tank meant putting the treads on one side in neutral or reverse while the other side continued forward. Because of this, tanks couldn't really move forward while turning — they had to stop completely, rotate, and then continue on their way. Modern tracked vehicles have largely overcome this with gearing that allows the treads to run at slightly different speeds, which allows for graceful turns, but sharp turns typically still require the tank to stop moving forward.

Humans, obviously, do not need to do this. We can go any of 360 degrees while going forward, backwards, sideways, whichever way we please. In early three-dimensional third-person videogames, developers had to deal with the camera for the first time. While directional motion seems simple enough, if the camera is locked in the direction that the character is facing, then a problem develops. Pressing left on the D-pad causes the character to face left, which causes the camera to face left. Since the user may still be pressing left, what left means now has changed, which will cause the character and camera to face left again.

Tank-like controls made it possible to have control over a character without having the character face a different direction from the camera.

Another reason this came into being was with games that had fixed cameras which changed position and orientation as the character moved from room to room. These were generally games with rendered backgrounds with 3D characters on top. If controls were camera-relative, then the direction that pressing "left" took you would frequently shift, sometimes radically. However, if the controls were tank-like, then "up" is always the character's forward. If you leave a room pressing "up", then "up" will still move the character away from the room on the next screen.

Because many Survival Horror games used prerendered backgrounds and a fixed camera, they were among the first to adopt this style. This led some to believe that this trope applies specifically to that genre.

This may also include games where you CAN turn while moving, but moving forward and backward are still noticeably separate from moving left and right. Compare a game like Grand Theft Auto III to a game like Resident Evil 4. The controls in the latter are very distinctly more tank-like than in the former.