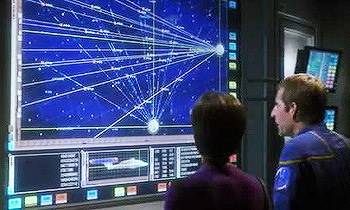 As far as most writers are concerned, space is flat, like a great big tabletop. A few may allow that space may have a third dimension as large as five or ten miles high, but not much more than that. There's just enough up-and-down to allow for dogfights between fightercraft and clever one-time-only attacks from above during battles between space warships. Otherwise, vessels approach each other as if they were floating on the sea and attempt broadside or bow-to-bow shots almost exclusively.

Maneuvering is also shackled to the horizontal plane most of the time. Very rarely will shows and writers take advantage of the lack of "up/down" in real space by having ships attack each other at odd angles or vectors, which would offer something visually and tactically fresh. Even outside of battle, when two ships approach each other, no matter where they come from, they will always be oriented the same way; you never see a ship flying "upside down". (On rare occasions, an exception will be made for derelicts. Then again, upside-down derelicts can be found in the ocean, too. In space, no-one can see you list.)

Perhaps as a corollary to the above, two (or more) starships, when involved in a standoff situation, will inevitably position themselves literally nose to nose in classic stare-down posture. This can be justified depending on the ships' weapons placements, but as often as not it's just a metaphor for the situation. The flip side of this is that when two friendly ships are together they will always be traveling side by side — that is, "shoulder to shoulder" — not unlike escorts, even when they're not escorting. Abandoned/damaged ships may list visibly to one side as if sinking. The near-total separation spaceships have between yaw, pitch, and roll, and the path their inertia is carrying them on, is very rarely observed — "fighters" will nearly always be pointing in the precise direction they are moving in (and bank when turning), as atmospheric planes are forced to. This may be explained for ships utilizing vectored thrust propulsion systems, as backward thrust will result in forward movement. Certain configurations may also still require banking to turn, even in space.

Characters rarely think of bypassing a planar asteroid belt or similarly hazardous feature by simply going above or below it. It's also possible to wall off part of the universe by placing a barrier that spans the full ten-mile height from top to bottom.

By extension, and by analogy to earth-bound geography, every major location in space is at a fixed position. A planet may turn on its axis (if you're lucky), but its place relative to its sun and other planetary neighbors never changes. Think of a model solar system made of balls on a table. All distances and travel times are static; all positions are permanent and unchanging. Orbits simply don't happen — if two planets are X units apart on the left side of their sun, they'll always be X units apart and on the left side of the sun.

A similar situation occurs when mapping out larger sections of the galaxy; these areas are always shown as two-dimensional planes, fundamentally identical to maps of the surface of a planet — all starfaring nations exist as flat, 2D shapes like real-life countries, and travel between different star systems is only plotted out in two dimensions. There is never any "overlap" between space nations (that is, no nation ever controls stars "above" or "below" those controlled by another), and space travel never involves going "over" or "under" star systems or stellar phenomena — everything in your way must be be either visited, crossed or gone around. In real life, although galaxies are certainly very flattened overall, they still have appreciable thickness — the Milky Way's galactic disk, for instance, is around 1,000 light years thick. Depending on how dense inhabited worlds are in a story, the third dimension would be very important to both politics and travel.

As a byproduct of this, solar systems and galaxies tend to be treated as flat "continents" in the "ocean" of open space. Someone approaching one from the outside will typically make "landfall" at its edge, while someone leaving it will travel all the way to the rim before departing. The idea of just moving at an angle to the orbital or galactic plane rarely gets brought up.

It isn't always a result of hack writing, though. Sometimes writers do this as intentional Acceptable Break from Reality; two-dimensional strategies are simply easier to show and explain, and much easier for most viewers to grasp (since that's how we're used to thinking). This is especially common in older video games, or tabletop games where three dimensions would needlessly complicate the interface. Furthermore, not only are we used to thinking in two dimensions, but there is no concrete precedent for 3D combat yet; ground and naval combat is two-dimensional, dogfighting isn't done with fleets and is limited by the atmosphere and ground, and submarine combat has important depth restrictions and maneuvering concerns (and has been recorded to have happened in all of history exactly once).

For pre-CGI film and live-action television, using motion control photography, it's also a technical limitation. You have to mount the spaceship somewhere.

See also Space Is an Ocean, Acrophobic Bird, 1-Dimensional Thinking, Sci-Fi Writers Have No Sense of Scale, Reality Is Unrealistic and Old-School Dogfight.